During college football season, my husband and I watched the Allstate Sugar Bowl game between Ohio State (excuse me, THE Ohio State) and Alabama. As an LSU fan, you’ll have to forgive me if I really did not care about it. But I digress. The point is, I watched the game because I’m a fan of college football. And as it turned out, the game was absolutely not the best thing happening in that broadcast. The best thing was a commercial featuring “Mayhem” from Allstate.

I’ve been recording live TV for five years, so I don’t watch nearly as many commercials as I used to. But live sports are one of the places where commercials still reach me. I’m familiar with Mayhem, but Allstate took this series of ads just one step further – from familiarity into awesomeness. 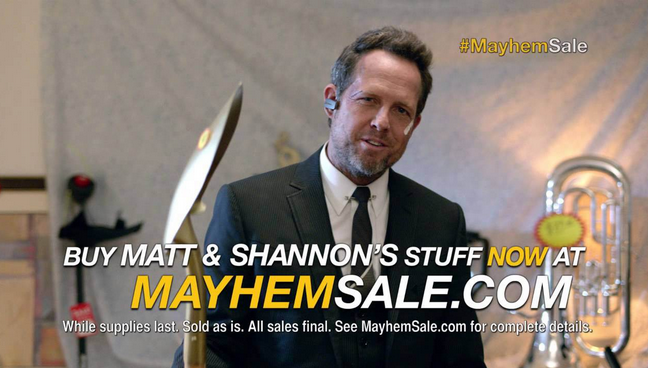 The series depicted Mayhem as a burglar who learned via social media that Matt and Shannon (actually a real couple) were going out of town to the Sugar Bowl game. While they were live-tweeting from the Superdome, Mayhem was selling all their stuff online for really cheap prices.

The first couple of times the commercial ran, I thought it was funny. Then, I logged on to the site and realized I could actually buy things. AND I WANTED THEM. I tried to buy a storage bench I needed for my own house, a TV because it was so cheap and, eventually, laundry detergent just so I could say I got SOMETHING from the Mayhem Sale. (I failed.) Even though the game was technically a “good” one, it seemed a lot more people were tweeting about Mayhem than about the score.

So, was the campaign just a lucky success, or is it something we can replicate? You’ll need to think through a few things.

Allstate has put a lot of money into its marketing over the last several years. Allstate sponsors field goal nets at several colleges, is the title sponsor of the Sugar Bowl and has been running Mayhem commercials for the last couple of years. It’s also one of the largest insurers in the country. People know Allstate. If Allstate runs an ad without once saying “insurance,” most of the people who see it would still get it. Bottom line, if you’re brand new, don’t try to pull off something like this right away.

This type of engaging campaign is not for every brand. If you have a very small audience, it may not be worth your money. And if your audience is children younger than 7, they probably aren’t going to be able to make the decision to engage at all. You have to meet your audience where they are.

One reason I failed to purchase anything from the Mayhem Sale was because their website could not handle the traffic. By the second quarter of the game, it would barely load. And in the third quarter, when I finally clicked buy on the laundry detergent, it timed out, and I lost my purchase. Allstate played it off about as well as they could by having Mayhem tweet about how it wouldn’t be fun if the website worked, but it was still frustrating for a lot of people. All the pieces have to work together if you want the whole campaign to be a success.

Allstate spent a ton of money on this. I don’t know exactly how much, but between the Sugar Bowl sponsorship, untold minutes of airtime, the replica of Matt and Shannon’s house (yes, they did), the replicas of all their stuff and the website, it added up. Does that mean you can’t pull off something excellent without breaking the bank? No. But that just sends us back to No. 3 – think it through.

No matter how awesome something actually is, there are no guarantees. Just because you spent a ton of money does not mean you’ll get a million hits on your website. Just because the idea was good doesn’t mean other people will love it. Still, a well-planned campaign should produce results. It’s important to decide what you want those results to be when you plan your campaign.