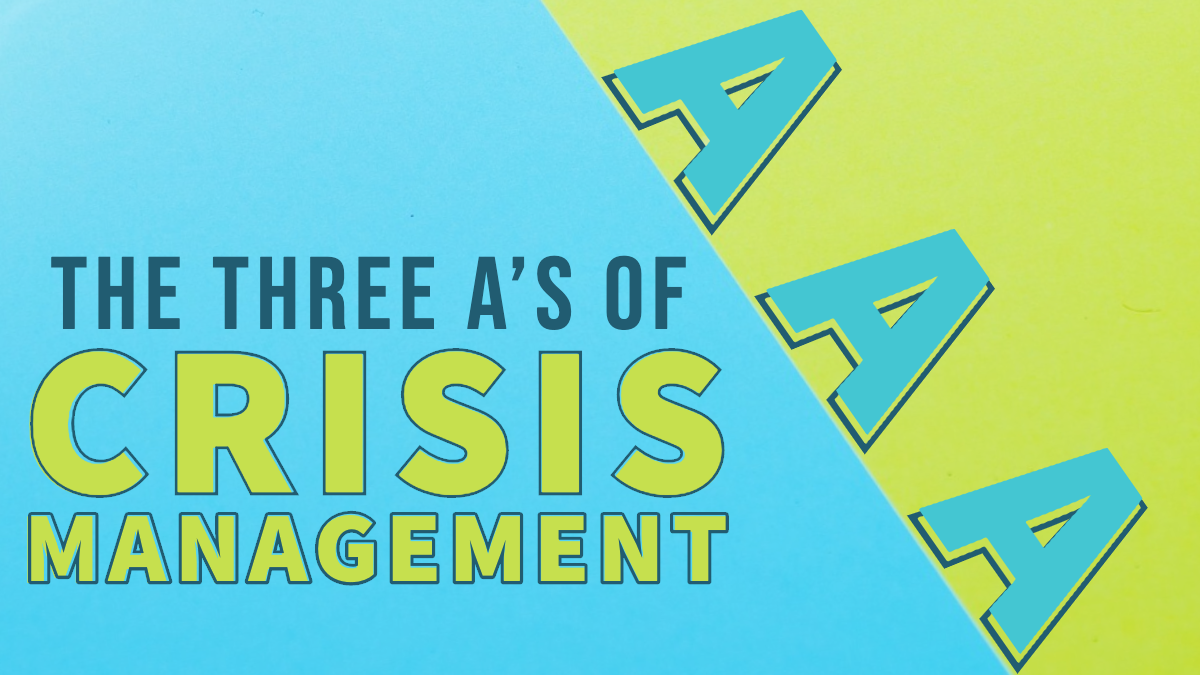 So, it happened… your organization just experienced a crisis situation. It’s quite common to feel a sudden onset of vigorous knots in your stomach combined with a growing lump in your throat. You know what I’m talking about – the kind of lump that develops when you’re trying to fight back those tears because you’re at work and melting down in public isn’t an option. Yep, now you’re with me.

For whatever reason, I’ve been “lucky” enough to help several of my clients manage intense crisis situations. Now, I wish I could say every crisis led to a happy ending, but that wouldn’t be even slightly true. Crises can be short-lived but have long-term implications. That’s just their nature. But as I’ve worked through various crisis scenarios, I’ve picked up a few key strategies as it relates to initially approaching a crisis.

Accept
One of the worst things you can be during a crisis is in a state of denial. It doesn’t help the situation to act as though it doesn’t exist, nor does being blissfully unaware make the crisis evaporate into thin air. It will likely only prolong the inevitable when you don’t just face up to it. I often advise my clients to own the crisis not because they necessarily caused it (depending on the situation), but because it will expedite the process of confronting the issue if they first accept that it is indeed an issue.

Acknowledge
Your key audiences – both internal and external – will eagerly await to hear from your organization’s leadership during a crisis. They want to know what you know, even if what you know is very little at that moment. Therefore, after you’ve accepted the crisis for what it is (I like to say you’ve “called a spade a spade”), you must communicate that. It’s perfectly acceptable to be transparent in admitting that you may not have all the details during the initial phase of a crisis. However, acknowledging the fact that leadership is at the very least aware goes a long way toward navigating the situation. Public acknowledgement can calm fears and decrease anxiety because your audiences will know someone’s on top of the situation at hand.

Affirm
Acknowledging a crisis lends itself to explaining what you plan to do about it. That’s where my last “A”’ comes in. Emotions tend to run rampant during a crisis. Those who like or love your company or organization not only want to hear that leadership is informed, they also want to know what’s next. It’s not always easy to simply state a solution or identify a path toward swift resolution. But, what you can do is reassure your audiences that something will be done. Even when you’re shaking on the inside during a crisis, your words of affirmation can be a strong tower in garnering confidence and credibility during times of uncertainty. One word of caution – be careful not to over-promise in your zest to affirm. Saying what you plan to do and promising a certain outcome are two very different things.

I can definitely say I don’t wake up each morning anxiously awaiting the next crisis situation to happen among my clients. However, I do know it’s part of my role as a strategic PR partner. So, I arm myself with my three A’s, and we get it done!