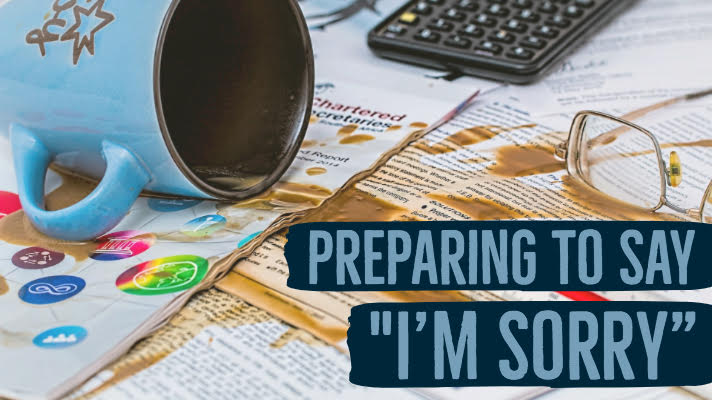 In the world of incessant internet conversations, it’s less about if your company will misstep and more about when. While outrage culture can nab businesses for the slightest infractions, this newfound accountability is a good thing. It pushes companies to pursue endeavors with integrity for fear of retaliation in the form of lost profits and shuddered doors. But inevitably, even those companies with the best intentions make mistakes, and they’re tasked with coming clean and saying sorry.

There are a number of elements that converge to make an impactful apology. Acceptance of blame, remorse, empathy and commitment to change all play a role in how the public views your statement. But today, I’m going to talk about one of the most critical aspects of a public apology – timing.

As companies connect with consumers on a daily basis, the channels of communication are more open than ever. Consumers expect that if you can serve them an ad on their YouTube video, you can serve up an apology on Twitter immediately after you’ve “stepped in it.” This is an interesting situation for PR and communication folks to navigate – how do you craft an appropriate apology on the spot? The answer is, you don’t. You prepare to say you’re sorry before you even make a mistake.

“Sorry seems to be the hardest word.” – Elton John
In a time of crisis, it’s often our first instinct to go on defense. That’s why having apology statements in your back pocket can make the process easier. Because let’s face it, it’s hard to say you’re sorry! During your next communication planning session, sit your team down and think about your business. What are some likely things that could go wrong that would cause public concern or outrage? Jot them down and think about what you’d need to say if any of those things came to fruition. Who would need to speak? Would you need to have a news conference or submit a written statement to media? Thinking through the process and what you might say gives you a template you can use to fill in the blanks should the worst ever happen.

If you’re Tylenol, drug tampering that leads to illness and death might be one of the worst things that could happen. But a sincere, quickly made apology, corrective action and years of open dialogue saved the brand. Don’t know what I’m talking about? That shows how good their apology was! Read about it here.

Rather than spending time trying to get over your ego enough to write a sincere apology, you can use a template statement, written in better times, to help get you started.

“Is it too late now to say sorry?” – Justin Bieber
Apology templates are critical because they save you valuable time in a crisis. There are few things more damaging to a company’s reputation than waiting too long to publicly address a crisis situation.

Take Equifax for example. In summer of 2017, the company realized that millions of Americans’ credit information may have been compromised. While they knew about the problem for months, they left the American people in the dark and eventually apologized in OCTOBER. You heard me right. It took them nearly four months (and two CEOs) to say they were sorry for exposing people to identity theft.

There’s a lot that went wrong in the Equifax situation , but identity theft would have been at the top of my list when I was preparing apology statements. Immediacy is key, especially in situations like the one Equifax experienced. With a prepared statement, they could have swiftly apologized and then started working on repairing the damage.

“If I could turn back time…” – Cher
Prepared apologies can help prevent you from creating a crisis within a crisis. If your template is drafted before the crisis occurs, the points you outlined might give you pause before you start saying things you probably shouldn’t.

For this example, we’ll head down to Orlando, Florida, to talk about SeaWorld. In 2010, Orca trainer Dawn Brancheau was drowned by Tilikum, a large killer whale, during a private dinner show. From the jump, the communication around her death was a mess. Originally, SeaWorld and the Orange County Sheriff’s office claimed Brancheau “fell” into the pool with Tilikum, though eyewitness reports (and later video footage) showed that the trainer was pulled into the pool by the whale. SeaWorld waivered back and forth for years, shifting between blaming Brancheau and putting their hands up. They struggled to even admit they were sorry for what happened.

The situation continued tirelessly for years. Documentaries and lawsuits followed the company, and have tainted its reputation. Though the tragedy is unthinkable, SeaWorld should have been prepared for this situation. Nearly 10 years later, the company is still adjusting policies to regain its public reputation. Even a few bullets and an apology plan could have helped alleviate some of the unneeded burden and stress in this sad time.

Apology plans aren’t foolproof, but they can help you respond appropriately and quickly in a crisis. So, next time your team gets together, think through a few situations you might need to apologize for in the near future!