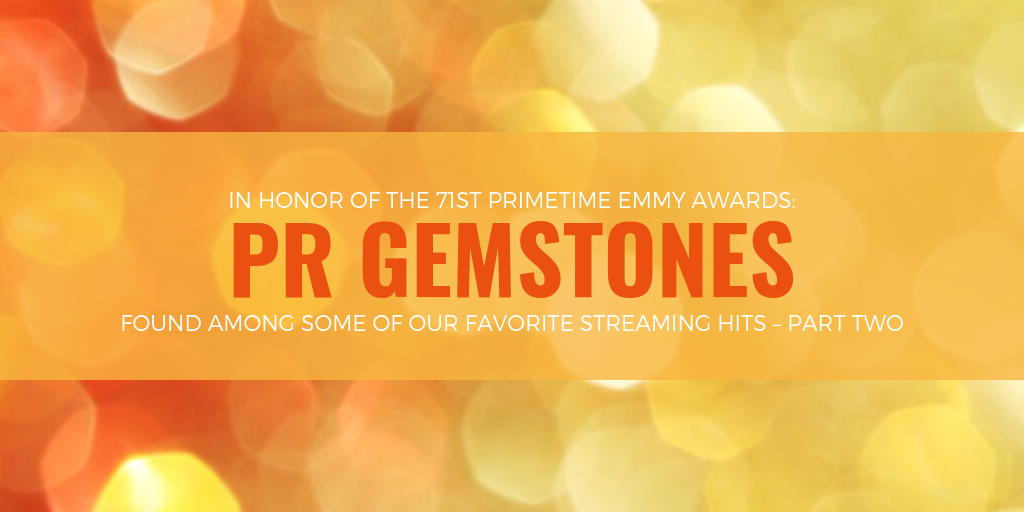 Welcome to part 2 of PR takeaways from some of our favorite binge-worthy shows!

Chernobyl (the truth demands to be told)

Chernobyl, HBO’s 2019 dramatized account of the nuclear meltdown at the Chernobyl Nuclear Power Plant in 1986 and the days following the crisis, is steeped in details. It’s a powerhouse of minutia. And it is in the deep and dark crevices of details that the circumstances leading to the disaster unfold, both from a scientific perspective and the political missteps by leadership, which exacerbated an already untenable and unthinkable scenario. And among all of these dizzying details is a centrifuge of lies, forcing unimaginable consequences into the universe.

In the opening scene of the mini-series, we find Valery Legasov privately telling his story – his truth, we imagine – to a cassette tape in the dark. The fact is, he has a stack of them. A stack of truths finally ready to greet the world. It has been two years since the nuclear disaster, and this Soviet inorganic chemist who was called upon to take part in crisis remediation efforts, wants to set the record straight about how plant and party leaders’ decision to downplay the incident, overtly lie to everyone involved and block immediate evacuation of nearby Pripyat was a most egregious crime.

From the very first sentences uttered in the series to the ominous closing ones (both voiced by Valery), we are repeatedly cautioned about truth and what the lack of it does to humanity.

“What is the cost of lies? It’s not that we’ll mistake them for the truth. The real danger is that if we hear enough lies, then we no longer recognize the truth at all.”

“Every lie we tell incurs a debt to the truth. Sooner or later, that debt is paid.”

If you’re in our profession, you should know that our duty is to be a broker of truth and transparency for the organizations we represent and their stakeholders. Unfortunately, that has been lost on many – those left to think PR pros are actually there to sweep the truth into a secret closet that no one will ever discover. But there is great honor and purpose to our industry’s work, and truth lies at the heart of it.

Stranger Things (never underestimate anyone, not even yourself)

If you’ve watched through the entire three seasons of this nostalgic Netflix juggernaut, one theme shines with neon strength – the heroes usually aren’t the ones in charge. Honestly, they’re not even usually adults. This extended storyline is mostly about some totally awesome kids and how they work together to save not only themselves but Hawkins and humanity in general.

And the kicker is that they usually do it without adult supervision – if you don’t count everyone’s favorite 80s babysitter, Steve Harrington, who’s along for the tubular ride. In this endearing series, the adults are sidebar stories at best, maybe except for Hopper and Joyce. (Who doesn’t enjoy that storyline?!) It’s amazing what these young people face with zeal and bravery and what they accomplish with only their wits, teamwork and loyalty to each other and the party in general.

Practical lesson here for us PR pros? We should never discount any team member’s ability to bring immense value even if they’re fresh or young or simply new to a role. And never underestimate yourself either. Skills are one thing, but when you have a passion and work toward a greater good, you can save the world one client at a time.