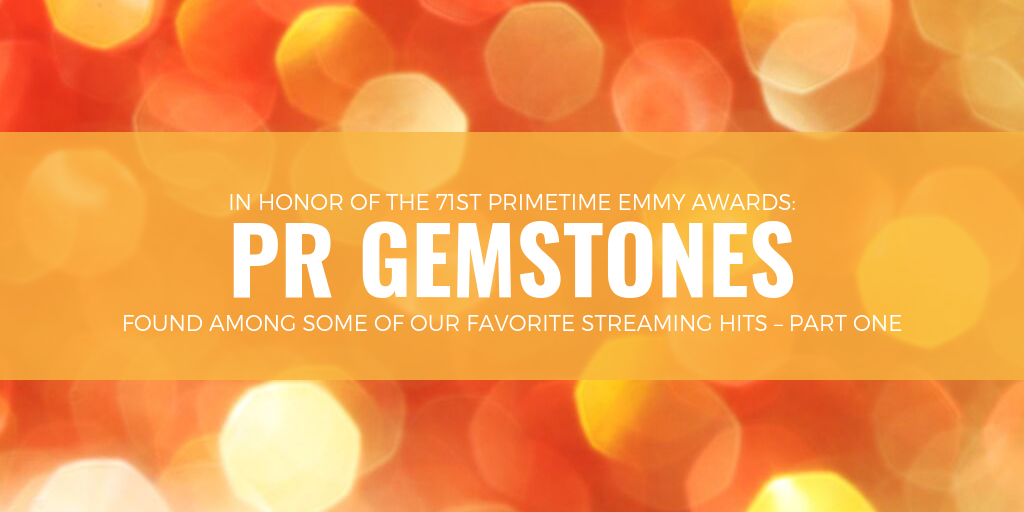 With the 71st Primetime Emmy Awards coming up on Sunday, here’s our timely nod to valuable PR lessons from our favorite shows to binge.

The premise of season 1 of AMC’s 2018 riveting horror anthology is scary aplenty without a supernatural demon beast stalking the crew of HMS Erebus and HMS Terror – two British ships on a polar expedition endeavoring to find the Northwest Passage. But one could argue that the real horror sits patiently and perhaps indifferently in the quiet and slow madness the crews fall into after the ships become icebound.

As you watch things unfold, you’re reminded over and over again that crews have prepared thoughtfully for such a long and treacherous journey by stocking enough provisions to last more than three years at sea. Though this prudence and mindfulness might give all (including loved ones back home in England) a false hope in early episodes, it is the subtle unraveling of their physical health, their sanity and their civilization – and not dwindling rations – that truly dooms the men.

Nothing could have prepared them for the isolation, the desperation and the unforgiving landscape of the Arctic. All of their knowledge, training, skills and humanity melt away in the tundra and among the mutiny, leaving them with only the desire to make it out alive.

PR as a profession often finds itself shouldering a massive burden of any organizational crisis, despite many of those very crises originating out of operational circumstances that have nothing to do with public relations. We are looked to as the warriors, the healers, the saviors even. And while swift and thoughtful action on the part of any advanced PR team can mitigate outcomes and impact, we practitioners must remember that all of the preparation and proper protocol in the world cannot remove the harsh and unrelenting conditions that some decisions and actions lead to.

The Crown (brevity is beautiful)

There’s a pivotal moment in season 1 episode 3 of Netflix’s The Crown that represents Elizabeth’s unforgivingly swift transition from princess to queen. She has just ascended the throne (and hasn’t even buried her dear papa) when she hosts her first weekly audience with Prime Minister Winston Churchill.

Fresh to her role as monarch and unknowing of all of the nuanced protocol of her father’s reign, she greets the prime minister and offers a seat and even a drink (tea or something stronger, perhaps). Churchill, in a most direct manner, declines immediately and assumes the role of teacher. He sternly advises that a sovereign is to never offer a prime minister refreshment or a chair, a precedent set by her great-great grandmother.

“To waste time is a grievous sin. And, if there is one thing I have learned in 52 years of public service, it is that there is no problem so complex, nor crisis so grave, that it cannot be satisfactorily resolved within 20 minutes. So…shall we make a start?”

I found that sense of brevity and urgency throughout the first two seasons as a breath of fresh air. Of course for storytelling’s sake, it works to move things along, and I’m sure it is an oversimplification for how Britain’s leaders were addressing serious global issues like air pollution, the coronation and the Suez Crisis.

But what a wonderful reminder that we mustn’t get bogged down and experience the dreaded paralysis by analysis when approaching a challenge or searching for solutions. Agency PR professionals often find themselves booked with meeting after meeting (sometimes marathon ones), and it’s probably quite easy to let an entire day slip by without feeling much sense of accomplishment. Let’s focus on action and build our days (and meetings) around that.