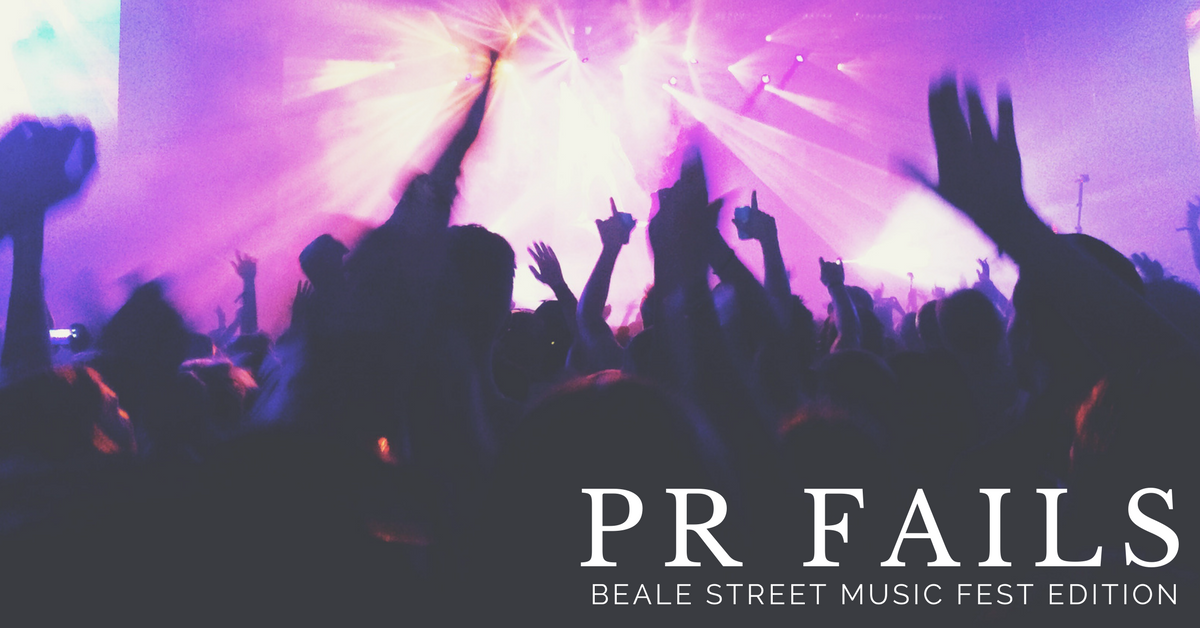 Memphis in May has finally arrived, and the 901 is gearing up for the first major weekend of this exciting month – Beale Street Music Fest! To celebrate, Gracie breaks down a few #PRfails from past performers. Enjoy!

The singer, songwriter, rapper and record producer performed at BSMF in 2011, which also happens to be the same year as his #PRfail. Green had been in Minneapolis on June 16 opening for Rihanna. Unimpressed by Green’s performance, a writer for City Page’s Gimme Noise blog wrote a negative review of the show.

Green took issue with this on Twitter. After a series of angry tweets where he assumed the sexuality of the article’s author, the news of Green’s Twitter rampage went viral.

We wish Green would’ve exited out of Twitter, called his PR agency and had let them get to work. It’s not the best idea to take issue with the press over anything other than factual errors, but sometimes a thoughtful response can do the trick. Unfortunately, this was not the case for CeeLo.

Walmart Inc. and Sheets Energy Strips sponsored a social media campaign for the rapper, agreeing to send the artist to the Walmart location that received the most “likes” on its Facebook page. David Thorpe of The Boston Phoenix heard about the campaign and decided to counter it with the Twitter hashtag #ExilePitbull. His prank worked, and a store in Kodiak, Alaska, received the most likes. The small town has a population of around 6,100 people.

Thankfully, Pitbull actually made the most of this #PRfail. He invited Thorpe on the trip with him, received a key to the city from Kodiak’s mayor, shared his experience through social media and performed before a crowd of hundreds. He rolled with the punches when this PR campaign didn’t go as planned, and it turned out to be a huge hit. We give two thumbs up to his PR team!

The band performed at BSMF in 2015, but their #PRfail wouldn’t happen until two years later. On Feb. 21, 2017, a man sued Cage the Elephant’s guitarist, Brad Shultz, for throwing his guitar into the audience during a show and striking the fan in the face. The guitarist was reportedly intoxicated.

When approached by media, Shultz declined to comment, and requests for a statement were not immediately returned by the band’s team. There are two ways to deal with a crisis – the right way and the wrong way. The band’s team definitely handled it the wrong way. When it comes to crisis planning, you must be proactive, easing tensions and allowing for better responses when a crisis actually occurs.

Who are you most excited to see at #BSMF18? Let us know in the comments!