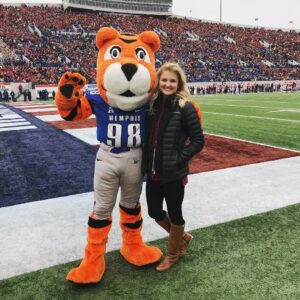 In the OPR office, if you have a question about sports, you head to Murray’s desk. For more than two years (nearly three if you count her time as an intern), Murray has provided restaurant and entertainment clients with top-notch PR services, honing her skills as the office event guru. When she’s not at the office, Murray spends her time cycling to Drake and engaging with the Memphis community through volunteerism. She answered some of our questions in the survey below!

You’re a TNPromise mentor and a Grizzlies Prep lunch buddy. Tell us a little about why mentorship matters?

Mentorship is so important, especially in a city like Memphis where nearly 50 percent of children are living in poverty. Serving as a mentor through TNPromise and Grizzlies Prep gives me an opportunity to be someone the kids can count on to show up, listen, celebrate them when they’ve done something great and pick them up when they’re down. I’m not there to give my opinion, I’m there to be a sounding board and give my advice if they ask for it. That’s all the kids I mentor really want, honestly. They want someone to listen, be a consistent presence in their lives and impart a little wisdom along the way without being overbearing. It’s my goal to be a positive influence in their lives who encourages them every step of the way.

Aside from mentoring, I also volunteer at St. Mary’s Soup Kitchen, the Humane Society of the Delta, Field of Friends and I recently completed orientation to become a wish granter for Make-A-Wish.

How did you decide PR was the career for you?

Up until second semester of my freshman year in college, I was dead set on being a broadcast journalist or sideline reporter. In the sixth grade, I photoshopped my face on to Katie Couric’s body for career day, and I spent my high school years commentating football games and anchoring the monthly news. I was named Arkansas Scholastic Press Association High School Broadcast Journalist of the Year in 2011. Ha! Apparently, they don’t deduct points for having a really strong southern accent. Then, I went to college and found out that broadcast journalism might not be the best fit for me. I was turned off by the hours I would have to work and the middle-of-nowhere places I would have to start my career. I’ve always wanted to be a present wife and mother, and being in TV news would hinder that if I have a family someday. So, I did a little research and found a career that allowed me to still use my love of writing, news and event planning – PR!

You’re an avid fan of CycleBar. What do you love about it?

I’m weird about my workouts. I don’t like people telling me what to do. It probably stems from playing sports and being forced to run foul poles in the dead of winter. (Still not over it.) CycleBar is an exception, though. The instructors are high-energy, motivating and always have some great music playing. It’s a good stress reliever and a reminder that I can do hard things – inside and outside the cycle studio.

You plan a lot of events for clients. What advice would you give to someone planning a personal party?

Hmmm… so many things I could say here. Always plan for more guests than you expect to show when ordering food and drinks. The absolute WORST thing that could happen is for you to run out of food, or even worse, booze!

What makes a client a great client?

A great client is one who is honest and understands the importance of communication. If there’s something I’m working on that they’re not too crazy about, a great client is honest and lets me know so I can adjust my approach. There’s nothing worse than letting down your client with a project you poured your blood, sweat and tears into. (OK, maybe not blood or sweat, but maybe I shed a tear or two when I couldn’t get that design program to do what I wanted it to do!)

In your opinion, who’s the football team to watch this year in the SEC?

Not Arkansas. Don’t look at us! I’m excited to watch Mississippi State, honestly. If quarterback Nick Fitzgerald can bounce back after his surgery, their offense should be tough. (Not sure who Nick Fitzgerald is? Think back to Thanksgiving. Was your family watching football? Probably. Do you remember when they all hooped and hollered when a player suffered a grueling leg injury in the Egg Bowl? Yep, that was him.) I don’t think they’ll be a contender for the SEC West, though. I’m looking for Auburn to ruffle some feathers and knock Alabama off the top spot this year for that.

Are the Grizzlies going to be better next year?

I hope so! It can only go up from here, right? If Mike Conley can bounce back, Dillon Brooks can stay hot and Chris Wallace can snag a nice draft pick who can come in and produce early, they should be OK. Rumor has it that Coach J.B. Bickerstaff is staying on board, which I think is a great move.

Any trips on the horizon?

Ah, trips. Luggage from my last flight is still missing (day 2) so I’m a little bitter about travel right now, but I do have some fun trips coming up. I’m heading to Denver next month. I’ve never been, so I’m super excited about that! Then, I’m going to New York City with some friends in July, and Key West for my childhood best friend’s bachelorette party in September. Oh, and… I don’t want to jinx it, but if Arkansas goes to the College World Series you better believe my mom and I will be in tow!

Back to Inside OPR