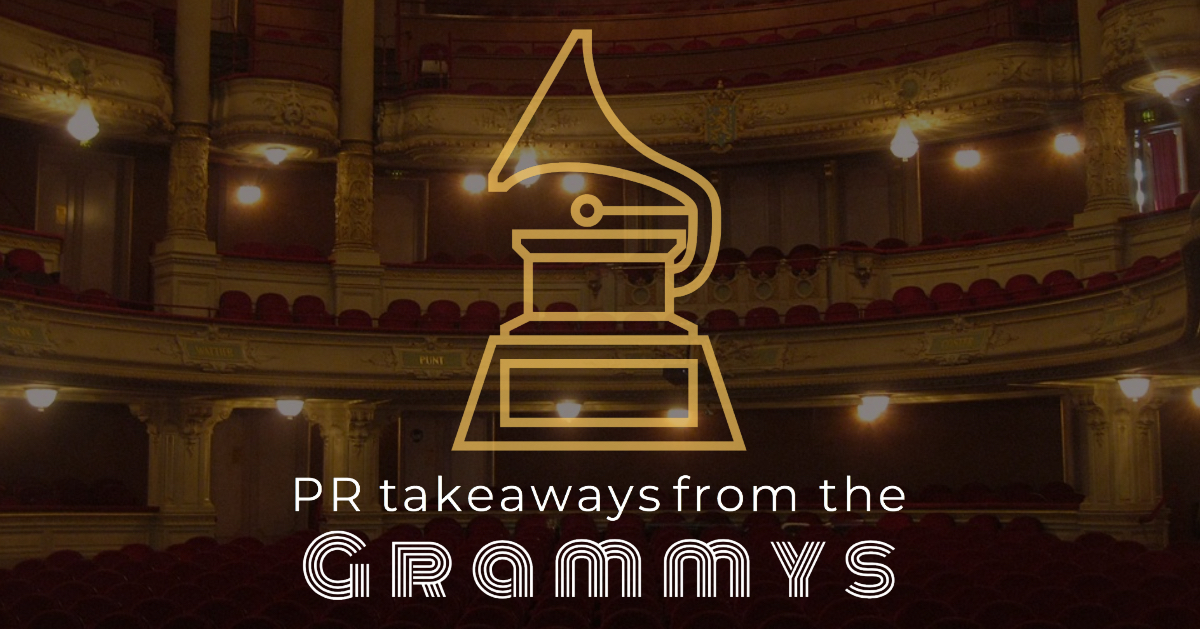 Hi. My name is Courtney, and I am an awards show super-fan. I’m the special kind of entertainment geek who gets giddy for the shows themselves. I order my favorite takeout meal and crawl into bed with remote in hand. Happy. Place. Found.

Although I was knee-deep into fun during the 61st Annual Grammy Awards, it was hard to miss some helpful takeaways from the telecast – some more obvious than others. So when you’re putting together your next fundraiser, location opening or just-for-fun celebration, take heed of these Grammy lessons! Enjoy!

Open strong and sustain the energy throughout the night! How you open an event can either immediately energize your guests or take the air out of the evening with a slow and deadly leak. Award shows are often harshly criticized for lackluster openings, but the Grammys kicked the night off with style and sizzle featuring a dynamic stage set and musical number featuring Camila Cabello, Young Thug, Ricky Martin, J Balvin and Arturo Sandoval.

Just when you expected the first award and a slow-down in pace, these five women took to the stage at once – host Alicia Keys, Jada Pinkett Smith, Lady Gaga, Jennifer Lopez and Michelle Obama. And when the former first lady simply drew a breath to deliver her lines, the crowd went absolutely wild. Cameras panned the audience to show the frenzy. It was magic. Thank goodness there was a lot of buzz left in the evening. From a Dolly Parton tribute to performances by Diana Ross, Lady Gaga and Alicia Keys, the energy carried strong.

So sure, you’re probably not inviting this kind of Hall of Fame-worthy talent to your next event, but that shouldn’t mean you can’t blow off the roof and bring down the house in your own meaningful way. Consider the following: How do guests perceive your event upon arrival? How quickly do they become mesmerized with their surroundings? What or who is the entertainment? How do you carry that same vibe throughout the night and send them home longing for your next event?

Message and tone matter – From the moment Alicia Keys took the stage, I knew it would be a chill ceremony – one that would keep the focus on the music and the love. And she didn’t let me down. Her manner set the tone for the show and was a welcome change, for sure. Talented, accessible, fun, relaxed and comfortable – that was Alicia. I’ve read many entertainment writers clamoring already for the show to bring her back next year or even host the Oscars. She has my vote!

Early on, it also was obvious that the Grammys were making up for last year’s poor showing in female nominees and award winners. And there was the regrettable statement by The Recording Academy’s president in 2018 who said women in the industry need to “step up” if they’re going to earn more nominations and awards. #PRFail for sure. This year, it was a chance to move on, and they did in a most grand and in-your-face fashion. The message was clear from the curtain rising to falling — women are a force in music and won’t be ignored. From a female host and many stellar female performers to Cardi B bringing home Best Rap Album (a first for a female if you can believe that!) and Kasey Musgraves winning Album of the Year, there was no doubt about who runs the world. #Girls!

When you put together your event, what tone fits your organization? Grandiose like a Gatsby party or a much more relaxed affair? Who’s your host? Does that individual personify the exact kind of “feel” you want to achieve? And what are you trying to say? What opportunities throughout do you use to further your mission, raise some money, sell a product or have good clean fun?

Avoid the bored look – Despite my affections for award shows, my attention span gets the best of me if the show goes beyond 10 p.m. This year’s show was a marathon one – three hours and 45 minutes. Sheesh! The only saving grace was that I was working on an urgent project on my laptop and had to pause the live telecast now and then to focus. Then I’d simply fast-forward through commercials and a few performances that weren’t up my alley.

But imagine if you’re at an event (wedding, silent auction, gala, whatever) – there’s no pause, no fast-forwarding through the slow parts or things that don’t interest you. If you feel boredom creeping up, you’re out! Your warm bed is calling. So when you’re hosting an event, remember length and pacing. You don’t want to wear people out, but you also don’t want to kick them out of the door before the real fun begins. Understand your audience and what they’ll expect from you and your party.

Always expect the unexpected – These kinds of shows are golden opportunities for the best and worst kind of surprises, things even the most veteran producers just cannot predict. For example, Drake won Best Rap Song for “God’s Plan.” No one really expected him to be there because many rappers were vocal about boycotting the Grammys. But up he walked from backstage stairs to his accept his award. Before you know it, he was basically saying that artists didn’t need a Grammy to feel successful. Immediate mic cut and slide to commercial. I’m sure they didn’t see that one coming. Same goes for Childish Gambino’s noticeable absence when he won Song of the Year and Record of the Year for “This is America” (a first for a rap song EVER). History was made without the artist there to accept.

But not all surprises were bad. Who didn’t enjoy watching South Korean boy band BTS swaying and singing to “Jolene” by Dolly Parton and Miley Cyrus?

Any kind of event – from the most glamourous soirees to the most intimate of affairs – can deliver the unexpected. Always have a plan B and learn how to navigate the bumps and to just enjoy the lovely things that couldn’t have been planned.